In late 1968 Mick Grant bought a scrap 'Steven's Velocette' frame from Jim Lee of Batley. This was extensively modified by both Mick and Jim, the completed machine being ready for the following season.

Subsequently known as the Grant Velo, it went on to become one of the most infamous and successful Velocette Specials of all time. In 2005 the bike returned to the UK. It had spent the last 30 years with Cory Padula in Vancouver, Canada to whom it had been sold at the end of the 1975 racing season.

The bike had been raced extensively that year, but suffered an unexpected and frightening failure at the Oliver’s Mount Cock o’ the North race meeting. The bike was entered in the 500cc Ted Andrew Trophy race, but during final practice the swinging arm broke on landing after taking the last jump of the Weaponess straight leading to the start-finish line. As anyone familiar with the circuit knows, this is not a straight at all but a flat-out bend to the right, before braking hard for Mere Hairpin. It was altogether a different riding experience at this time, as there were no Farm Bends to slow the approach to the finish-line. This meeting was the first time that timed practice had been introduced, the fastest 24 riders of the 40 eligible for each race class would qualify. 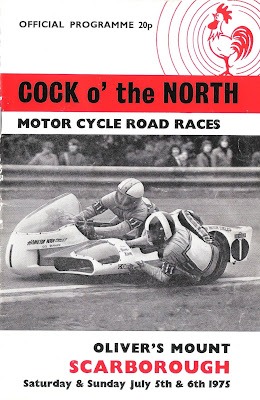 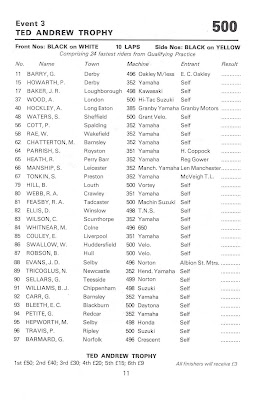 The swinging arm had broken across the slots through which the wheel spindle passes and wheel was only held in place by one remaining reduced section of tube. Clearly it was not an elegant landing, but for some extremely fortunate reason, the wheel remained very loosely in place, albeit collapsed into the top of the frame. After bringing the bike to rest, the machine was retired and a non-starter in the race the following day.

It was unsurprisingly the last time the bike was raced prior to being sold.

Before the bike was sold, repairs were made to both stiffen the swinging arm and provide greater strength at the failure point. The wheel-spindle slugs were also extended to give greater engagement within the main tubes to ensure that this failure would never happen again. The bike continued to be raced in Canada by both Cory and Ian Marshall for a period of approximately 10 years before it was taken apart pending a rebuild.

During this period the swinging arm must have again started to crack, as when it returned in 2005 there were further stiffeners welded in place around the wheel spindle slots. The combination of these and the original modifications were not at all pleasing on the eye and hardly the thing you would want to ride with any conviction. It was therefore decided to re-make this section of the swinging arm and amend how the rear wheel was adjusted and held in place. The swinging arm was marked out carefully on a surface plate and the rear sections cut and removed from the original repair sleeves. The lower suspension mountings were also removed during this process. New rear fork sections were machined from scratch, which would hold both the wheel spindle captive and provide a thread for the suspension mounting bolts.

The new sections were bronze-welded in place using oxy-acetylene. The swinging arm and fixings were pre-heated with a butane burner, as the sections were thick and would take a large amount of heat to get to the welding and uniformity temperatures required. The loose side-plates and main fork sections were set and held in place using lengths of adjustable screwed rod. 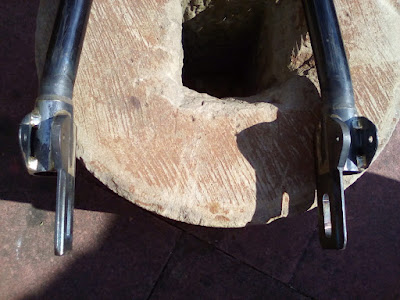 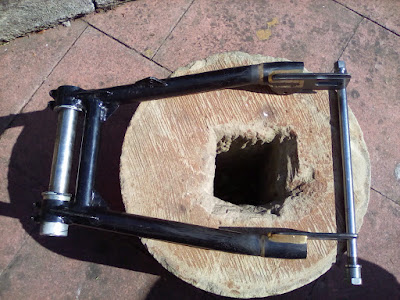 Following completion of all the brazing, the swinging arm returned to the workshop for final machining. The wheel spindle slots had been left 1mm undersize to allow enough material to ensure that the swinging arm pivot and wheel spindle could be perfectly aligned. This was checked using a surface-plate, vee-blocks and a vernier height-gauge.

Wheel adjustment is now to be made using snail-cams and the open ends of the main swinging arm tubes capped with a register against which the cams will bear. A pair of dural cams were machined from scratch to give the required amount of chain/wheel adjustment.

Posted by The Yorkshire Ferret at 11:07 No comments: