The Hopper Special – making a stir on your debut

H3 was the third special made by Ian Hopper of Glasgow. The rolling chassis was made as a one-off by Joe Potts and featured a tubular chassis, suspension and wheels of a type used in his JP racing cars. The car used the very best component parts available at the time and was finished to an exacting standard throughout. The bodywork was designed by Ian Hopper as a true all-round sports car and incorporated a covered spare wheel and seating compartment for his German Shepherd dog. There is even a photograph of this remarkable all-rounder returning from a holiday at Strontian with a gralloched stag wrapped up on the luggage grid!
A Lea Francis 1496cc dirt track engine was fitted to the car. This was a competition engine designed by Ken Rose for dirt-track racing in the US and was a gear driven double hi-cam, cross-flow, dry sump unit producing 118bhp.The engine was slightly detuned and was fitted with twin SU’s as against the four Amal’s fitted as standard.
The car was extremely successful and Ian joined forces with Jimmy Gibbon and Harry Slack to form the Ecurie Ossity team. They beat Ecurie Ecosse to win the inaugural 1952 Charterhall 3 Hour Team Relay Race.

The debut for Ian Hopper and his new special was on the 30th of June 1951 (just nine days after it was road registered) at the Bo’ness International speed hill climb. It turned out to be a successful debut with Ian being victorious in the 1500cc un-supercharged sports car class and also setting a new class record.
Such was the stir that the Hopper special had caused it wasn’t long before the authorities starting questioning its legitimacy. As can be seen in the Autosport cutting below at the Winfield meeting the organisers impounded the Hopper special after its race to analyse the fuel. Sadly for the organisers they were to be very mistaken in what they suspected. 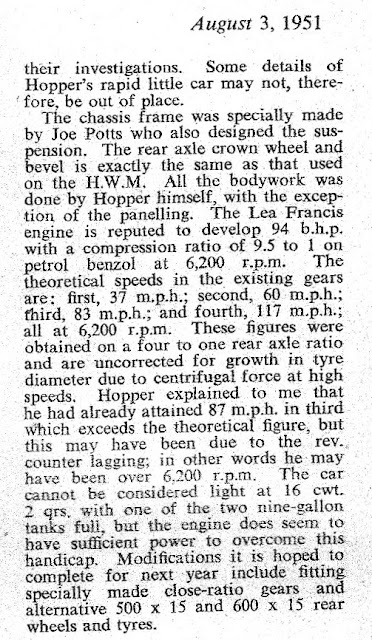 Posted by The Yorkshire Ferret at 06:30 No comments:

I thought I would share some pictures of the newly manufactured chassis for Joe Potts’ Desmo. The frame is a replica of the original 500cc Razorblade frame that Alec Crummie made prior to the start of the 1958 season. The frames are made to be ass authentically as possibly. The rotary tube swaging machine used to make the original tapering down tubes was even tracked down and used for the manufacture of the new tubes. Even the resin used when bending the tight radius tubes came from one of Joe Potts' friends who he built racing cars with.
﻿﻿
﻿﻿

It should be noted that the frame has been made to the same specification that Bob McIntyre raced the original Razorblade from the Silverstone Saturday meeting onwards. Before the Silverstone meeting, Alec Crummie added two extra tubes running from swinging arm pivot to the top tubes in order to increase the frame stiffness. The original 500cc Razorblade subsequently had these tubes removed (but the original brazing can still be felt) when it was converted into a 250cc Manx by Archie and George Plenderleith.
The front brake has also been sourced for the Potts Desmo. It is just as Joe was going to fit into it – a 4LS Gilera unit that McIntyre brought back Bellshill. The brake has had the ‘Potts treatment’ in the same manner as he did to the original.
Posted by The Yorkshire Ferret at 13:17 2 comments:

The Razorblade frame 50 years on

1958 in Joe Potts’ workshop in Bellshill:
2011 the original Potts 500 Razorblade frame with two replicas:
Posted by The Yorkshire Ferret at 04:12 No comments: