In 1958 Paul Dunstall went somewhat against the grain and started to race a Norton Dominator motorcycle. This was quite unusual at the time, as generally they were not considered to be a machine fit for this purpose and Norton already produced a very able racing motorcycle in shape of the Manx. Through his racing exploits Paul developed the Norton Twin with considerable success and following his retirement in 1960, was able to offer a range of special and tuning equipment for the various models. In 1961 he became an official Norton dealer.
In 1963 Dunstall purchased the works Norton Domiracer that had been ridden by Tom Phillis to 3rd place in the 1961 Senior TT. He also purchased all remaining spares and stock relating to Doug Hele’s experimental  lowboy project.

This is a short blog on his catalogue from the early 1960’s listing the parts available for these models. 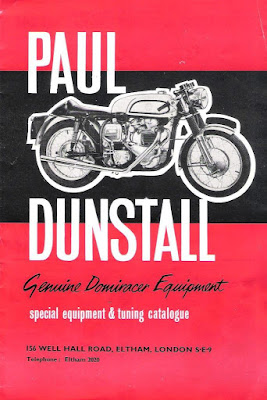 Dunstall provided race bikes for many riders over the years, the following are listed in his catalogue:-

He continued to develop the Norton Twin throughout the 1960’s and in 1969 started the season with a radically different spine-framed machine designed by Eddie Robinson. This frame was manufactured for Dunstall by Jim Lee at his Birstall premises in Yorkshire and was considerably lower and lighter than the previous lowboy design. Jim went on to produce some very successful spine-framed machines of his own, the most successful being the TR2B Yamaha raced by Mick Grant.

And so to the catalogue. 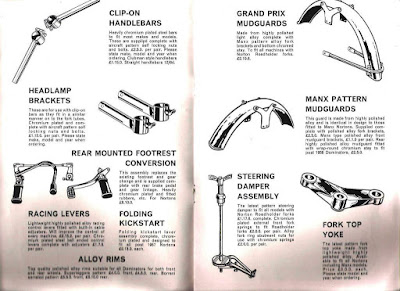 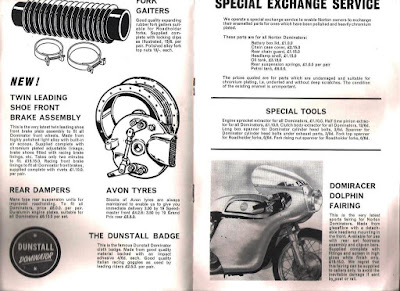 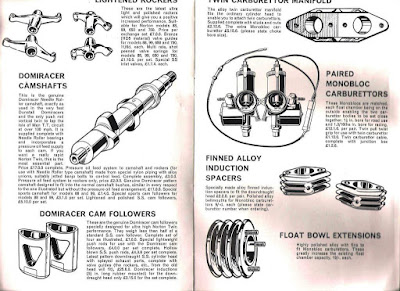 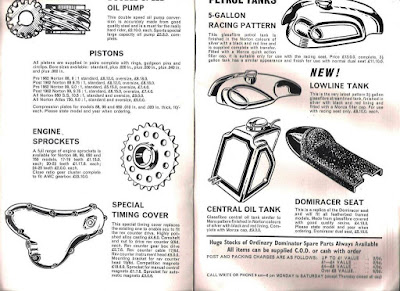 By 1966 Dunstall was building complete machines, based on the Norton, BSA and Triumph twin cylinder models available at the time. As well as offering various light-alloy and tuning modifications, options included seats, tanks and fairings, all of which gave the machine a distinct Dunstall look. In 1970 he became a Honda dealer and parts were included in his later catalogues for these machines. He also put his name to a 3 cylinder Kawasaki racing motorcycle designed and built by Alan Baker. Again the frame and tanks of this machine were built by Jim Lee in Yorkshire and it used a double disc front brake designed by Eddie Robinson which had previously been used on the ‘drainpipe’ Norton bike. 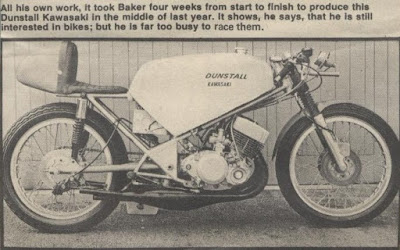 Dunstall continued to sell customising parts for Honda, Kawasaki, Suzuki and BMW machines until he sold the company name in 1982.


During the 1950’s there was a dramatic shift away from motorcycles to car ownership. This resulted in decreasing markets for motorcycle manufactures, which in the case of some companies meant that diversification into the four wheeled market was an obvious step.

One such manufacturer was NSU, who in 1955 received the directive to produce a small four-seater car. The specification of the car was for it to have a mass of approximately 500 kg and a speed of above 100 km/h. Another notable design constraint for NSU was that it would have to utilise its existing equipment and machinery that was developed for the production of motorcycles.


The engine for this new vehicle was to be a twin-cylinder four stroke. During early scheming a 400cc engine capacity was considered, however NSU settled on a 600cc unit. The engine would be air-cooled as NSU had extensive experience of this through its motorcycle manufacturing and also due to production cost reasons.

The engine, gears and differential for the new car would be housed in a single transversally positioned block in order to ensure a compact, sturdy unit with a favourable centre-of-gravity and low production cost. The clutch was mounted on the left of the crankshaft as was the blower wheel, which was attached to the clutch driving wheel. The gear drive was obtained by helical spur gears between the clutch and main bearing. On the other side of the crankshaft ‘Dyna’ starting equipment was mounted, which controls lighting whilst the starter also acted as a flywheel mass. Cooling air from the blower wheel was guided into a sheet metal sleeve which forced it around the cylinder block and cylinder head.


The twin cylinder unit utilised a common ignition source, so for this reason the crankshaft had only one throw and consisted of three drop-forged parts, i.e. the two crankpins and two bearing pins to the right and left and of the compact centre piece, which was developed as a counter-weight and flywheel mass. Following the initial machining and grinding of the crankpins, the crankshaft was assembled with a press-fit and the insertion of an intermediate ring, which allowed their separation (by pressure) in the event of repairs. The final grinding of the main pins was completed after the press-fit of the components.


Lubrication for the connecting rod bearings was carried through channels leading from the main bearings into the hollow crankpins whose ends were sealed by blanking plugs.  Besides the two main bearings, there was one step bearing on the side of the clutch and one on the side of the lighting attachment. The clutch and pinion were held on the left pin by a pair of needle roller bearings. This method of supporting the crankshaft proved very successful as it resulted in lengthened intervals between overhauls. The big-end bearings in the connecting rod were not of the split-type.  The bearings for the mains and big-ends were conventional tripartite components (supporting plate of steel, lead bronze and a third layer for the purpose of reinforcement). The rods with their built-in bearings are fitted before pressing together the crankshaft assembly. Oil flung from the big-end bearings was sufficient to lubricate the cylinder bores and gudgeon pins.
﻿

As mentioned previously, the complete housing of crankshaft, gears and differential was constructed of an aluminium alloy pressure die-casting with high degree of rigidity. Extensive ribbing of the block surfaces was used to evenly distribute stresses at locations such as the thrust blocks and where heavily loaded screws were inserted. The lower part of the housing also acts as an oil sump, with a capacity of approximately 2 litres.


The two cylinders and the channel for the valve drive gear was cast in a single piece. The cylinder bores were induction hardened and, in order to reduce wear of the cylinder bores, an alloy of grey-cast iron and chromium was used as the material for the cylinder blocks. Rid-shaped openings for the inflow of cool air were placed between the two barrels and between the housing for the camshaft drive. The cylinder had passages for both the pressurised oil feed and oil draining from the upper valve gear. The cylinder bore measured 76mm and with a 66mm stroke resulted in a cubic capacity of 598cc.


The cylinder head for the two cylinders was once again cast in a single piece of chill-cast aluminium. Pressure die-casting was not possible due to the complex shape of the ports. The combustion chamber was semi-circular, which allowed valves with large diameters to be fitted. The valves were fitted at an angle of 32° to the cylinder centre. Both the valve seats made from grey cast iron and bronze valve guides were shrunk into the head. The cylinder head had comprehensive finning on all surfaces including the centre section between the two combustion chambers. The inlet valve seats had hardened surfaces, whilst the exhaust valves were armoured with a special heat resisting steel alloy. Two valve springs were fitted to each valve.

Two cam ladders were fitted onto the cylinder head for the camshaft which was die-forged and case hardened. It was also hollow in order to provide lubrication to the camshaft bearings and cam tracks. The rockers were also case-hardened and fitted with a hardened chromium rubbing layer.


Probably the most technically interesting aspect of the engine was the drive methodology for the camshaft. On the side of the lighting attachment, the crankshaft was fitted with a control pinion which operates a control wheel on a short shaft. On the same shaft are two narrow eccentrics. Light connecting rods were utilised to transmit this rotary motion to similar eccentrics on a short shaft in the cylinder head, substantially in line with the camshaft. The weight of these ‘side rods’ was compensated by counterweights. In order to prevent distortions through heat expansion of the cylinder or cylinder head, the upper eccentric shaft runs on roller bearings in a separate housing. This housing is pivoted to the cylinder head to one side. A third thin connecting rod, non-rotating serves to maintain the true distance between the eccentric shafts in the crankcase and the cylinder head. The non-rotating intermediate rod was placed close to the rotating connecting rods and as a consequence is equally heated, while still keeping the necessary distance for the control gear, quite independent of the heat expansion of cylinder and cylinder head. Transmission from the upper eccentric shaft to the camshaft which, although placed in line are not necessarily coaxial, is obtained by a pressed-in pin on each of them and a trailing link connecting these pins. All supporting points of the valve gear were generously lubricated, which also acted to remove heat. This system of cam drive was first used by NSU on their Max motorcycle. It was found to require practically no maintenance whilst also ensuring high levels of rigidity between the crankshaft and camshaft. With this valve drive system NSU’s Sport-Max proved to be a highly successful 250cc racing machine which was even able to win the World Championship.

The car was heated by fitting heat exchanges around the exhaust manifold. Intake air flowed through an oil-bath/ air filter to a Solex carburettor. An NSU developed diaphragm pump fed fuel into the carburettor.


The engine unit was suspended in the vehicle using one rubber mounting to the front and two to the rear.


With this powertrain, the Prinz-4 weighed 565 kg and was capable of reaching 120 km/h. Fuel consumption was approximately 5.7 litres/100 km. In the Sports-Prinz, the vehicle weight was 555 kg, whilst a top speed of 133 km/h was achievable as a result of a more aerodynamic body shape.
Posted by The Yorkshire Ferret at 10:33 2 comments: