A product from Yorkshire: The Jowett Javelin and Jupiter flat-four engines

Yorkshire may not be renowned for automotive engineering, but in its West Riding on the outskirts of Bradford there was a hive of such activity. This article focuses on the Jowett car company who ended up with their factory at Idle just north of Bradford.


The Jowett name goes back to 1901 when Benjamin and William Jowett along with Arthur Lamb set up a cycle business that went on to manufacture V-twin engines for driving machinery. I do not intend to describe the whole Jowett history, but instead will focus the developments of their most famous engine; the flat-four fitted to the Javelin and Jupiter cars.

Following the Second World War, many vehicle manufacturers were conservative design-wise as they re-started production for civilian products. This was not the case with Jowett. Their Javelin saloon introduced in 1945 was inspired to some degree by the popularity in England of the Lancia Aprilia. Gerald Palmer had joined Jowett as Chief Engineer during the War at the mere age of 30. The Javelin was his first vehicle. This advanced car utilised a flat-four cylinder engine which offered many benefits such as:

The new engine had overhead valves and was initially available in two forms, a 1200cc unit of 69.5 by 78mm bore and stroke, and a 1500cc version of 72.5 by 90mm bore and stroke. The smaller unit was intended for the home market, whilst the bigger engine was destined for export. Both engines had a compression ratio of 7.25:1. Subsequently there was a change in Jowett policy which caused Palmer to concentrate on the larger 1500cc engine. 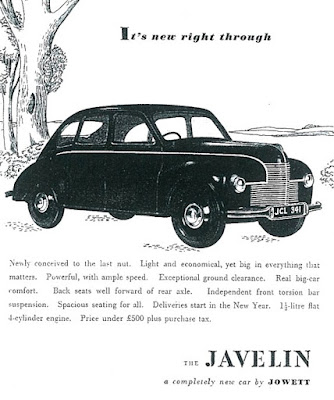 In its early form the engine had a two-bearing crankshaft running in white-metal bushes carried on the crankcase, a circular spigotted cover at one end eliminated the need for a split crankcase. The crankcase was cast in aluminium alloy to D.T.D. 424 specification. And wet cylinder liners sat on a joint washer at the base and were clamped down by the detachable cylinder heads.

Cast iron cylinder heads were utilised which incorporated a vertical inlet port leading to siamesed valve ports which allowed the use of one carburettor per pair of cylinders. The exhaust ports were at the bottom of the cylinder head, with the exhaust gas being taken away by an integral manifold under each head. A metal duct directed cooling water to each valve seat. The combustion chamber was a stepped type; the inlet platform providing a squish area to promote charge turbulence over the exhaust valves, from which side the mixture was ignited.

The valves were push-rod actuated with hydraulic tappets also being incorporated into the mechanism to account for thermal expansion of the aluminium crankcases. These tappets were lubricated from one of the main oil galleries, with lubricant filtered by the full flow method. 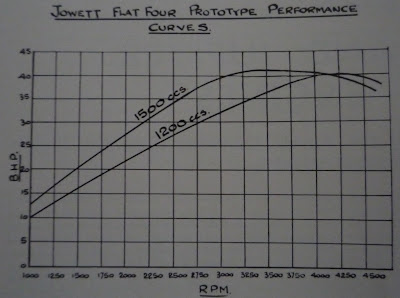 The new engines, in both sizes, were extensively tested both on the bench and roads. The prototypes had 10mm spark plugs, but subsequently 14mm plugs were used. The 1496cc version produced 40 BHP, but this was soon increased to 50 BHP due to improved engine breathing.

Posted by The Yorkshire Ferret at 13:06 No comments: