The following blog pays tribute to an extremely able motorcycle road-racer who lost his life in July 1974.

Motorcycle racing is a dangerous sport and sadly always will be. It is doubly sad when a tragic event is caused by something outside a rider’s control, something that he could do nothing about. His only failing therefore was to be in the wrong place at the wrong time.

Vic was killed following an incident at the end of 250cc class practice at the Oliver’s Mount circuit. On being shown the chequered flag signifying the end of practice, the rider directly in front of him braked suddenly after crossing the start-finish line. As the start-finish line is on a gentle right-hand curve, it is taken at a relatively high speed before braking hard for the tight left-hand Mere Hairpin. In having to move off-line to avoid the slowing rider in front of him, Vic was pushed to the right-hand side of the track and into the picket fence immediately above the Paddock. He died instantly.


That 1974 Cock of the North meeting on July 7th was a tragic event. Phil Haslam was also killed when his 350cc Pharaoh Yamaha misfired on the steep climb out of Mere Hairpin and he pulled to the side of the track. In doing so he moved into the path of Steve Machin, who in the midst of the perusing group, hit him from behind. He was shunted forward against his screen, severing his jugular vein. 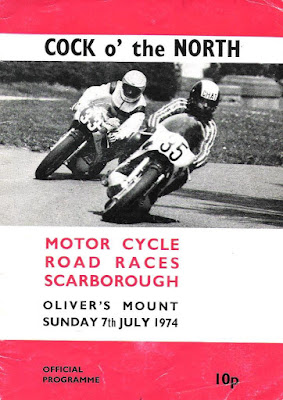 Victor J. Wright was a motorcycle mechanic by trade and worked at Wraggs Motor Cycles of Sheffield. Wraggs were a family owned firm of northern motorcycle dealers in the early 1970s, which also had branches in Chesterfield and Mansfield. The owner of Wraggs was a keen follower and supporter of motorcycle road-racing and sponsored many riders over the years. Their supported rider at this period was no other than John Cooper. Wraggs did not sponsor Vic Wright, but I feel certain they would have been extremely proud of the results he obtained on uncompetitive machinery over the years. Vic certainly became the talk of the Sheffield motorcycle fraternity, when on a Greeves Oulton he manged to lead John Cooper on his Yamsel at Mallory Park.

In 1968 Vic purchased a brand new Greeves Oulton - 35RFS116 from V.S. Bentley, another Sheffield motorcycle dealer based on Abbeydale Road. It was well known at the time that these RFS 350cc racers were a huge disappointment and Greeves halted production after just 2 months and 21 had been made. The dated cast-alloy frame was totally inadequate for a 350cc bike as were the brakes, resulting in a poor handling and woefully under-powered machine. To quote Derek Pickard “only 21 were made and no real successes were recorded anywhere”

However within 2 years, two people had these uncompetitive British machines flying.
One was Bob Stevenson of Spondon Engineering in Derby, the other a mechanic from Sheffield – Vic Wright.

Both of them took it in turns to hold the 350cc Race Record at Darley Moor. Don’t forget this was 1970 and the Junior class was awash with TR2 Yamahas. By now the 350cc Yamaha was producing 54bhp and challenging Agostini and the works MV Agusta for the World Championship. 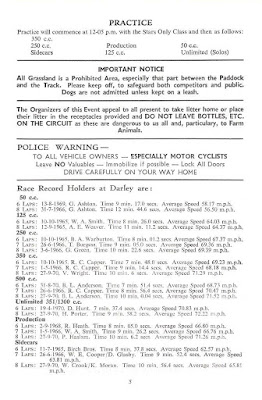 I accept that Darley Moor is primarily a clubman’s circuit and as such the level of competition is not as great as that found in ACU National events. So let us move to the 1971 season opener at Mallory Park. This is a National meeting with a top-class entry of established British riders. Heat 2 of the Junior Race reads like a ‘who’s who’ of motorcycle road-racing stars. 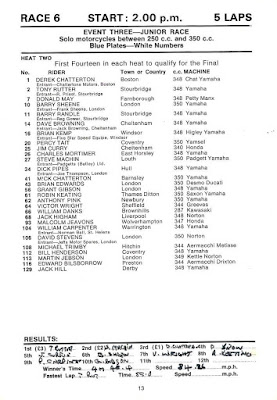 Virtually everyone in front of him was on a Yamaha, all being sponsored and supported riders. Finishing immediately in front of him in 6th place was Barry Sheene, in 5th Jim Curry, in 4th Dave Browning, in 3rd Derek Chatterton 1970 British 350cc Champion, in 2nd Steve Machin 1970 British 250cc Champion and the winner was Tony Rutter – Champion elect. What a result.
Ah you say….”it was only a heat”
Oh yes that is true, but Vic finished 9th on the Greeves in the final.
Can you believe it….Greeves were in the money!

So let us look at the second Heat: 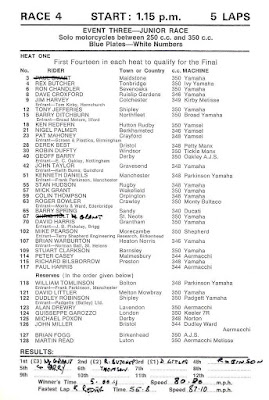 To finish 9th in the Final with the quality of that combined field is truly amazing.

Since purchasing the machine in 1968, he had performed similar ‘giant-killing’ acts at various circuits throughout the UK, including a wonderful 6th place in the 350cc British Championship race at Oliver’s Mount Scarborough on 10th May 1969. 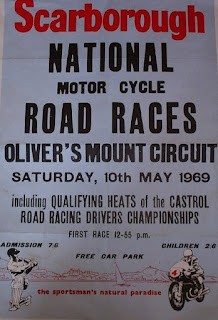 Two weeks later he did even better at Cadwell Park in the Coronation Trophy 350cc race. Here he finished in 5th place, in 4th was Cliff Carr, in 3rd Ken Redfern, in 2nd Billie Nelson and the race being won by acknowledged Cadwell expert Derek Chatterton.

In September of 1971, Vic took 35RFS116 to the Manx Grand Prix for one last time. He lapped at over 92mph in practice, only to have a piston ring fail on the start-line whilst waiting for the off of the Junior race proper.

Victor eventually succumbed to the inevitable and bought a 250cc Yamaha. On this he finished 6th in the 1972 Lightweight Manx Grand Prix and recorded an even better result the year later finishing in 3rd position.


Following Vic’s tragic demise, a trophy was put up in his memory by his friends at the Sheffield Road Racing Club. This trophy was to be awarded to the 3rd place finisher in the Lightweight 250cc Manx Grand Prix and honours Vic’s best result in that same race.
Previous winners are:    1974 Steve Ward
1975 Ricky Burrows
1976 Mick Grice
1977 Clive Watts
All the above received the award based on this qualification.

Ten years later in 1987 the trophy was awarded for a last time to David O’Leary.