Barton Motors - the Sparton, the Phoenix and more


Barton Motors was started by Barry Hart and Tony Ryan. The Barton name is derived from the first name of the two company founders. Barry and Tony started the company by investing £15 each, in order to set up a barn with two lathes. Early business concentrated on producing racing gearboxes for Japanese bikes, then went on to clutches, cylinder barrels and heads.
One of Barton’s first breaks was when they were approached by Rex White of Suzuki GB. Rex wanted a 350cc Suzuki for Barry Sheene to race, and enquired with Barton whether they could do something with the Suzuki GT380. What Barton came up with was a water-cooled engine which still utilised the GT380 crankcases and crank. At a practice session at Brands Hatch, Barry Sheene was able to lap inside the existing lap record. However, the Barton 350cc was never raced. The official line was that Suzuki Japan heard of the 350cc, and put a stop to it as Sheene was contracted to race in the 500 and 750cc classes only.  In reality the Barton 350cc although promising, needed further development.
The 350cc three cylinder became the ancestor of the 500cc Sparton motorcycle. The Sparton name comes from Barton engine coupled to a Spondon rolling chassis. During the development of the Sparton, Tony Ryan left the business as he was less interested in motorcycles. Barry Hart and his wife Marilyn moved from Surrey to Caernarvon with the business. Graham Dyson (now of Nova transmissions) joined Barton Motors soon after they moved to the chapel at Pontrug.
It was 1974 when the 350cc three cylinder Sparton was starting to get off the ground. The engine had a 52 x 54mm bore and stroke, and utilised a Suzuki bottom end with special gear ratios. The initial 350cc Sparton was a little heavy compared to a Yamaha twin, so for 1975 a special lightweight unit with magnesium cylinder block and chromed aluminium liners was produced. Due to the chromed bore, Barton Motors spent much of 1975 waiting for the special piston rings which were necessary. Barry Hart therefore decided to concentrate on the 500cc class. The 350cc Sparton was sold to Monster Car Hire at Thames Ditton for Peter Dalby to ride.
The initial Sparton 500s were actually 458cc engines using Omega pistons with a bore and stroke of 60 x 54mm. The Suzuki GT380 crankcases still formed the basis of the engine. The standard Suzuki is a 120 degree triple with six main bearings, geared primary drive and a six speed gearbox. The cylinders on the standard Suzuki are quite widely spaced apart to allow good airflow around the barrels. This made it easy to make space for water jackets for the water-cooled Sparton. One of the most obvious differences between the Sparton and standard Suzuki, is the use of a gear driven water pump on the drive side of the Barton and the Krober electronic ignition which is driven directly from the other side of the crankshaft. Inside the crankcases there were further differences, for example an extra bearing was added on the Sparton due to the   small supporting area on the timing side of the crankshaft.
The 460cc Sparton produced 95bhp compared to the standard Suzuki GT380’s 37bhp. A special 525cc Sparton which used Yamaha pistons produced 100bhp. The 500 Sparton shot to prominence at the 1975 TT when Martin Sharpe reached 146mph at the speed trap – fastest in its class jointly with the Works Kawasakis. In 1976 things got better for the Sparton with a 1-2 victory For Martin Sharpe followed by Big Frank Kennedy at the North West 200.
Graham Wood raced the latest version of the Sparton, which utilised a short-stroke 497cc engine to produce an estimated 105-110bhp. This Sparton was capable if over 160mph. In 1977 Graham Wood scored 12 firsts as a privateer on the Sparton 500. The Sparton engine cost £1300 on exchange (£1450 complete) whereas a Suzuki RG500 would cost more than double. Reliability of the engine was always an issue due to the use of Suzuki 380cc crankcases. A Sparton 500 engine weighed 92lb complete, which was 30lb lighter than an RG500 unit. However, due to the cycle parts utilised the Sparton actually weighed more as a complete machine than the Suzuki.

Barton Motors didn’t just make their own engines. They also modified many types of racing engines. Barton Motors offered mods to private owners for the Suzuki GT 750 which had established itself in F750 racing. Barton Motors offered four different stages of tune which resulted in the engine producing up to 115bhp. The conversion was extensive and included, keying the crankshaft tp prevent twisting, the insertion of spacers on the crank in place of oil thrower plates so that petroil could reach the main bearings, while big-end bearings were made fully floating to prevent seizure. A dry clutch mates the engine to a six speed gearbox and ignition is by Krober or the cheaper Femsa alternative. Barrels were re-worked and could be sleeved for ease of repair, heads were modified, and a floating exhaust system with expansion boxes was allowed to resonate on flexible stubs. The 750 development brought Barton Motors closer to Suzuki and they re-sleeved barrels for the Works racers and also manufactured replacement parts.

The Barton aim was not merely to cater for clubmen racers, so they went head-to-head with the Japenese. The Barton Phoenix was their attempt to make a machine to rival the Japanese is the large capacity classes. The Phoenix was to be produced in 500cc and 750cc sizes. 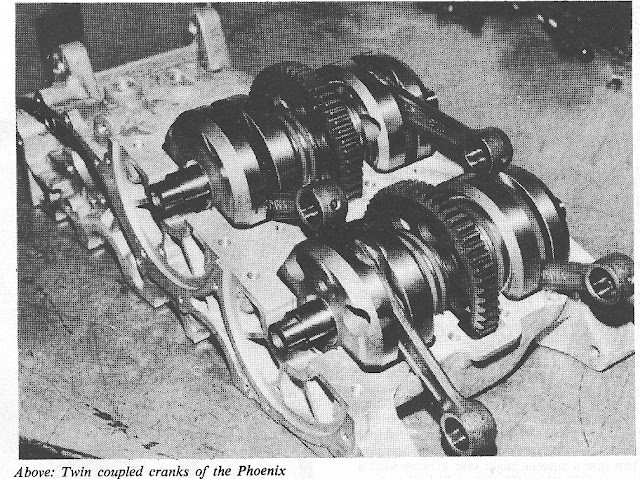 The Phoenix project started in 1976. The Phoenix was a square four two-stroke which followed the Suzuki RG500 concept. Barry Hart choose not to use reed valves (like the Yamaha 750 utilised) as they restrict performance at the top end. The Phoenix used disc valves like the RG500, as they permit the use of asymmetrical inlet timing.
Although the Phoenix followed RG500 principles, there were some improvements to increase the internal strength of the engine. The Phoenix crankcases have more reinforcement and water passages do not cross joint faces as in the Suzuki. The internal crankshaft coupling was improved (an area of weakness on early RG500s), the gearbox is stronger and the clutch is lighter by using Yamaha 750 clutch plates with improved pressure plate bearings and a less complicated release mechanism. In several places the bearing support and lubrication was also improved over the RG500.
The Phoenix engine was entirely of Barton manufacture apart from RG500 bearings and Yamaha pistons – OW31 for the 750cc and Yamaha 250 pistons for the 500cc. For cylinder liners, the Phoenix engines used aluminium sleeves with chrome bores which drop into the pot from the top where they are located in the block and held by the head. The porting of the Phoenix 500cc was like a 250 Yamaha, whilst the 750cc used OW31 porting but with disc valve induction. 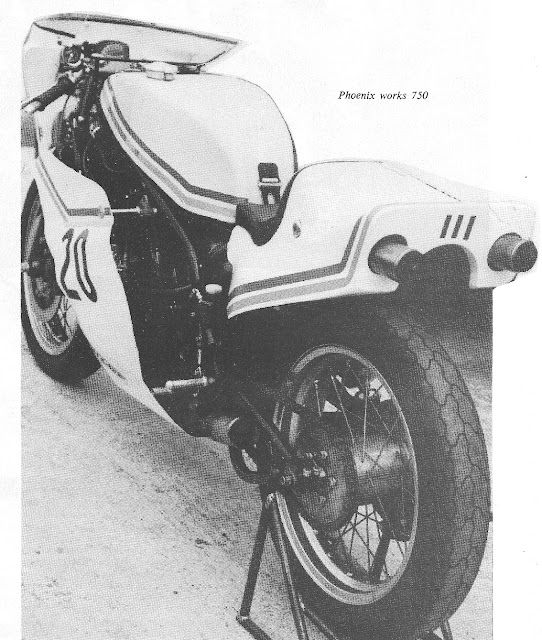 By 1979 approximately ten Phoenix engines had been manufactured (two of which were 500cc). The Barton team were honest by suggesting they “wish to sell these engines to people who are prepared to work with us to solve any problems that may occur”. In 1978 Graham Wood aboard a Phoenix beat Ron Haslam on an OW31 at Donington in a heat. He nearly did the same in the final, until a plug oiled due to an overly rich mixture. By 1979 Barry Hart still regarded the Sparton 500 as a more suitable engine for 500cc GP racing due to its reduced weight than the Phoenix unit.
Posted by The Yorkshire Ferret at 14:09 6 comments:

From the archive of Ernie Pico

I am indebted to the family of Ernie and Wanda Pico for the following wonderful set of photos. For some information regarding Ernie Pico who is most famous for making rapid Velocettes which were capable of beating the Works Harley Davidsons in Flattrack events, please see my first post:
Ernie Pico Velocette
Ernie’s wife, Wanda was also a significant character in the American racing scene, as she had a highly successful business making motorcycle leathers for all the top riders and teams.
I will let the wonderful photos do the talking: 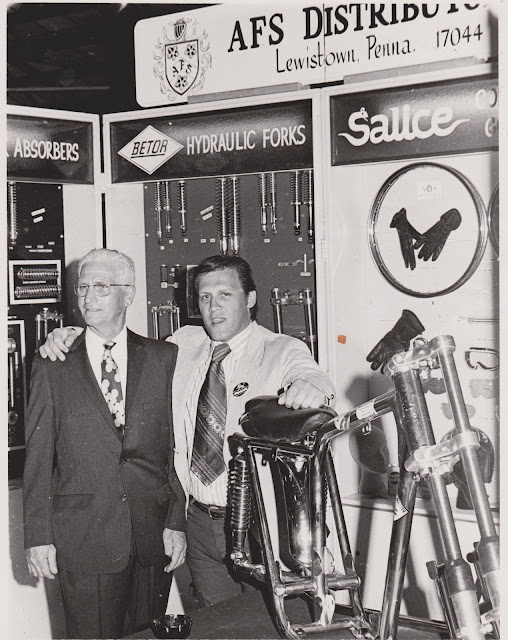 Posted by The Yorkshire Ferret at 12:41 3 comments: