The ceasing in production of Norton and Matchless production racers in the early 1960’s left a void in machines that were available for racing in the 500cc (or Senior) racing class. Whilst some smaller manufacturers made limited numbers of machines; Seeley for example, the cost of these machines were prohibitive for the average Northern racer.

This article covers a group of racers from Yorkshire who independently made the same decision as to what would be the most suitable machine to race in the Senior class:- Quite simply it had to be a Velocette. 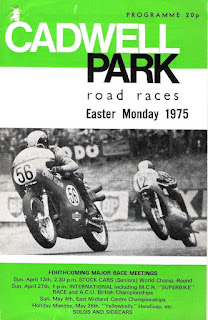 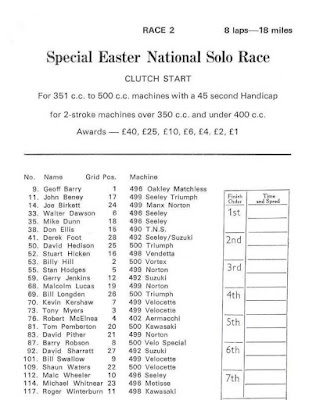 Given that Velocette did not produce a production racing 500cc machine, were somewhat dated and conservative in their designs, one must assume that it was something in the Yorkshire water that helped them to reach this conclusion. In making this choice all would end up being incredibly creative in the design and building of their individual ‘specials’. And they would guard their secrets jealously; it could be expected not to pass on useful tuning information to a fellow competitor, but even amongst the same family, ideas and knowledge were kept to one's self.
True to mafia form.

Mick Grant
Mick Grant was born at Middlestown, Wakefield in 1944. His racing career started on a Velocette Venom Clubman in 1965 at Batings Dam hill climb. Road racing followed in 1966 with his debut being at Croft. By 1968 Mick had managed to clock up a few club racing victories on his relatively standard machine. For 1969 Mick purchased a frame from Jim Lee of Batley for his Velocette. This was one of a series that Jim Lee had manufactured for Reg Orpin; the complete bike being known as a ‘Stevens Velocette’ due to the name of Reg’s dealership (L. Stevens Ltd.). The frame Mick purchased was actually a scrap frame that Jim had left at his premises in Birstall.

The Jim Lee frame was a full duplex affair, but Grant’s was modified considerably by Jim and Mick from the standard ‘Stevens Velocette’ by mounting the engine a full 2.5” lower. The gearbox however remained in the original position, necessitating a somewhat unorthodox chain-line. The seat rails of the frame were single tubes all the way to the steering head and were lowered 2” by ‘double-bending’ the top tubes at the rear of the fuel tank. Mick fitted Norton Roadholder forks, Girling rear dampers and aluminium tanks to his machine. Instead of the original cast alloy swinging arm produced by Jim Lee, he used a STD Velocette item that had a joining brace brazed in position. One of the most interesting features of the machine was a hydraulically operated twin leading shoe front brake which utilised a BSA hub.

It was on this machine that Mick really started to become successful with the machine becoming known as the ‘Grant Velo’. The complete bike was light in weight when compared with a Manx Norton or Matchless G50 and Mick well understood the gains made. He also realised the importance of a good start and latterly developed a coil-ignition system to help get him off the line. This along with a ‘bump-pad’ attached to the NS top suspension mount, meant that most times he was first away and resulted in him obtaining some very impressive results. In 1969 he finished 6th in the 500cc British Championship race at Croft and in the same position at the Scarborough May National. The following year he went one better, grabbing a 4th place at the Croft March National.

In addition to coil-springs, a Stanbra inlet valve and camshaft were fitted to the engine and Mick put considerable effort into calibrating a Wal Philips fuel injector for circuit use on petrol. All this on an engine with non-matching crankcases. Mick took the bike to the 1969 Manx GP however it was not successful; a magneto failure left him with a 20 minute push-in from Hillberry and so was ultimately the last finisher. Mick kept developing his machine; the hydraulic drum brake being replaced by a disc brake built using a Vincent hub, Hillman Hunter disc and a Girling hydraulic master-cylinder taken from a Triumph Herald.

Eric Stanbra
Given the small world of the racing paddock, it is no surprise that the Yorkshire based Velocette racing mafia ended up knowing and sometimes helping each other. One example of the latter case was with Eric Stanbra of Stocksbridge near Sheffield. Eric had raced occasionally himself, but even though he might state differently, Eric’s strong point was not his riding. Where Eric really did excel was with his engineering and machining capability.
Eric had come from Germany just prior to the start of WW2. His mother left her life behind and walked all the way from Germany to England with Eric as a ‘babe-in-arms’ to avoid persecution. Eric was still proud of his German heritage and this was often expressed by his admiration for German engineering. It was also due to Eric that a fair chunk of Yorkshire ended up buying NSU Prince cars!
The one non-German motorcycle brand that Eric admired was Velocette and for many years used a Venom on the road. As such it was not surprising that he started racing one himself, before the protests from his young wife grew ever louder and he reluctantly allowed other's to ride his bikes. John Smith from Sheffield rode the ‘Stanbra Velocette’ for a season and helped to develop the bike, with Mick Grant also getting his leg across on various occasions.

Given Eric’s engineering ability it was also not surprising that he could offer some help to other riders. Mick Grant was one such beneficiary. Eric started to help Mick on specific engineering projects related to his bike; the hydraulic drum front brake being a notable example. He also manufactured his own camshaft based on a Somerton polydyne design, but unlike the original version was superbly made and overlaid with stellite. This rendered them almost indestructible and of the original batch of three, all still survive. Eric was very keen on reducing the reciprocating weight of the engine valve-train and as well as all the usual lightening mods, machined his own titanium valve spring retainers to be used with his favourite Fath coil springs. Following the early failures of Thruxton inlet valves, Eric used his contacts to get some forgings produced in N75 and machined these with a larger diameter stem. Due to the care he took in both manufacture and preparation, Eric's machines were very reliable indeed. As Mick became more successful he went on to be sponsored by Jim Lee of Batley. Mick raced an array of machines to great success for Jim Lee in 1970 and 1971. During all this time Eric Stanbra was working as their mechanic.
Towards the end of 1971 when it was apparent that Mick was going to move on to stardom with other sponsors and Works teams, Jim Lee wanted to thank Eric for all his help and offered to make him a rolling chassis.
The choice of what the frame should fit was apparent; it had to be for a Velocette. The frame was designed by Eric but bore similarities to the Norton Commando frames Jim Lee had been recently producing. As well as making the frame, Jim also provided Seeley front forks, Lockheed hydraulic components and one of his seats. This went on to become Eric’s most notable creation.

Posted by The Yorkshire Ferret at 08:58