The following blog relates to two International motorcycle road-race meetings held in East Germany and Hungary during 1961. Motorcycle racing was very popular within the Eastern Bloc at this time, with manufacturers and riders being encouraged by the State to hone their skills in competitive events. 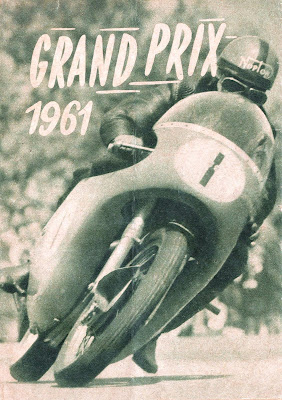 Contrary to the title, Hungary did not host a round of the FIM World Championships, the race being purely an International event. 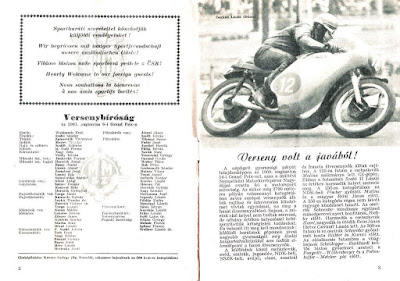 It was held in the south-east Kubanya District of Budapest, on a road circuit within Nepliget or the ‘Peoples Park’. The track was 3.1 miles in length and consisted of a series of curves with only a short start-finish straight. It was driven in an anti-clockwise direction and was a real test of driver and machine, as both braking and acceleration were done within the bends. 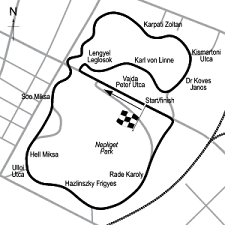 It was for just this reason that the immortal Tazio Nuvolari was able to hunt down and frustrate the vastly more powerful Mercedes and Auto Union cars in the 1936 Hungarian Grand Prix. Initially the race was led by the Auto Union of Bernd Rosemeyer, quite soon to be passed by Rudolph Carraciola in his Mercedes. After 26 laps the Mercedes engine failed, handing the lead back to Rosemeyer. In second place was now Manfred von Brauchitsch in a Mercedes, but hot on his tail was il figlio del diavolo in his under-powered Alfa Romeo. Under pressure von Brauchitsch eventually cracked and ran off the track. This left the road in front clear for Tazio to chase down Rosemeyer. This he did, winning the race by nearly 15 seconds from Rosemeyer with Archille Varzi in an Auto Union finishing third, 2 laps behind. On that day in Nepliget, a 100,000 Hungarian spectators saw the mighty silver cars well and truly beaten. 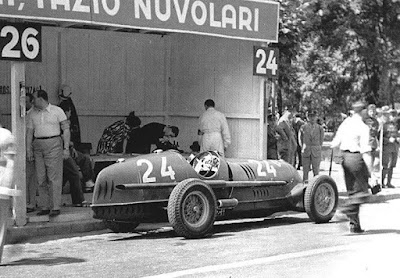 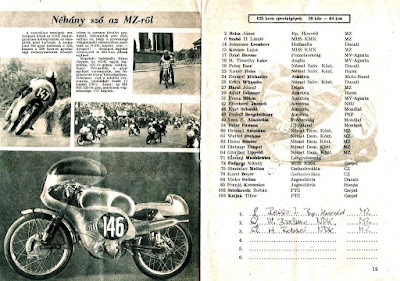 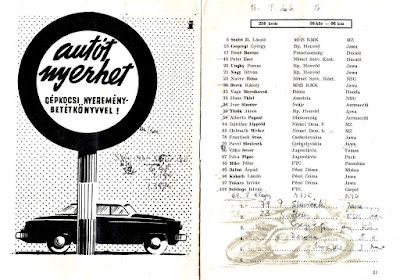 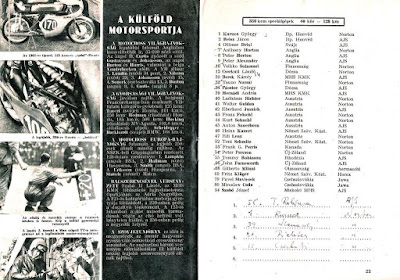 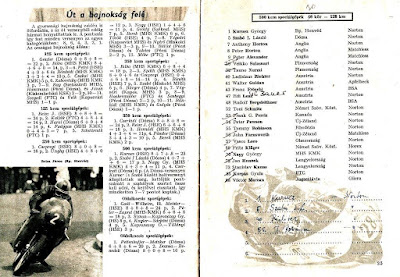 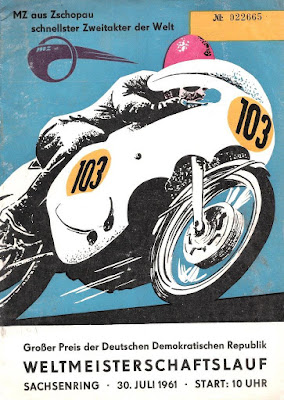 The East German Grand Prix was the 7th round in the FIM World Championships and was held at Sachsenring race circuit near Hohenstein-Ernstthal. The event was mid-way through that year’s GP season and so was well supported by factories and riders alike in the quest for championship points. Over 250,000 fans turned up that day to see the very best in motorcycle sport. 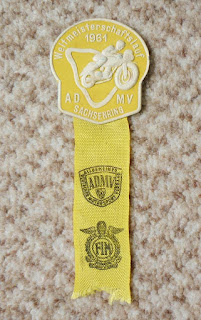 In attending this event you not only got the opportunity to see the world’s best riders and machines, but also a chance to win a 250cc motorcycle in the motor-racing Tombola. When you bought a programme, a number is printed in the right-hand corner of the front cover and this was your chance for glory.
Just look at the prizes:- 1st – 250cc Motorcycle
2nd – Television and aerial
3rd – Washing machine 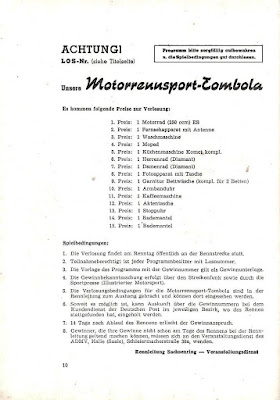 If you were unlucky enough not to win one of these superb prizes, you could always save-up and buy one of the cars or motorcycles advertised in the pages of the programme. The choice was not huge but one would imagine the service and knowledge relating to these machines was exemplary. 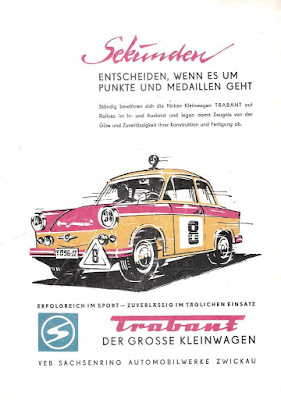 So to the racing:

Rather than show the record lap speeds for the Sachsenring circuit, an interesting table of the maximum speeds obtained is given. It is worth noting that Norton’s were fastest in 1959/60, as they had been in 1935/36 with the great Jimmy Guthrie. Sadly Joe Craig was no longer around to see this, but would have been proud of his legacy. 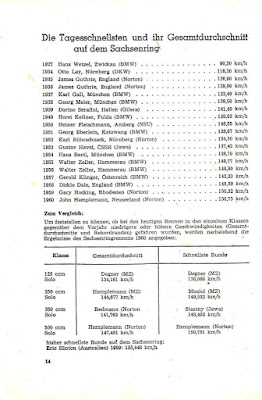 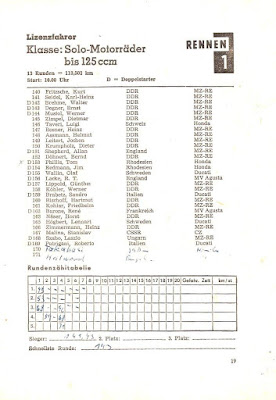 
Walter Kaaden would have been rightly proud of this result. With a humble 2-stroke single, to take on and beat the works Honda machines with all the resources they had at their disposal, was nothing short of a minor miracle. But knowledge and understanding play a strong hand and in Ernst Degner he had a rider who could deliver the result. Sadly this was not to last, as later that year in the Swedish round of the FIM World Championship's, Degner was to defect to the west. He took with him all the technical knowledge and experience that allowed Suzuki to produce a 50cc racing bike that would win Suzuki's first world championship in 1962. 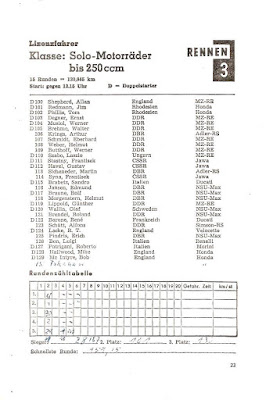 At the finish it was an all Honda affair, but with Mike Hailwood on the ‘private’ bike beating the works machines. However all eyes were on McIntyre, left at the start with a misfiring engine, he pulled to the roadside to change a sparkplug. It was all to no avail sadly, but the delay stung Bob into life and he continued the rest of the race on three cylinders. For the next ten laps the huge crowd were treated to a display of vintage McIntyre as he tore after the leaders. First Gustav Havel and his Jawa got the chop. Then the MZ’s of Werner, Musiol and Walter Brahme were passed by the stuttering three. Alan Shepherd on the leading MZ was the next victim; even Phillis who’s Honda was running on four but seemed over-geared, was powerless to halt Mac’s progress (into fourth place). And Takahashi might have suffered a similar indignity had he not got 36s in hand with only five laps to go. On the penultimate lap the 3 cylinder Honda cried enough and a mechanical failure meant after the ride of day, he could only limp home in 8th place. 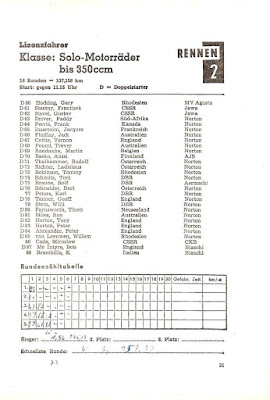 
No one was ever going to catch Gary Hocking, but a great ride for Bohumil Stasa on the Jawa. For once the Bianchi held together until the end of the race and after a poor start Bob McIntyre fought his way through the field to finish 3rd. 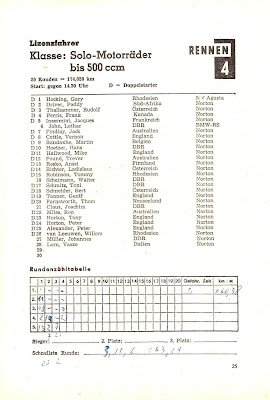 
Sadly the enthusiastic spectators were denied another chance to cheer for the perennial underdog. McIntyre had put an entry in the 500cc class on the Potts Manx, but the organisers had made a mistake and he was not on the starters list. The organisers said that he could still race, but they would not pay him any additional start money, so Bob informed them in that case it was not worth wearing out the bike. Once again Gary Hocking won the main event, but Mike Hailwood having one of his last rides on the Ecurie Sportive Norton before signing for MV, finished a worthy 2nd.

Posted by The Yorkshire Ferret at 02:11